Manufacturing Manager Jesse Ziegler leads a manufacturing team of 40 employee-owners at Swissturn/USA. Not only is he a natural at the technical aspect of programming, setup, troubleshooting and repairing machines but he is an advocate and leader of continuous improvement, always eager to try new technology and processes. He is also a leader who cares about the success and well-being of his colleagues.

Ziegler enjoys creating training programs for his co-workers as well as mentoring them to help them grow and succeed at the company. He uses his experience of the challenges and lessons he has learned in his 17 years at Swissturn/USA to be a positive example for his colleagues.

Swissturn/USA hired Ziegler as a co-op student at a local vocational high school. He was an eager learner who quickly picked up the skills needed to set up a Swiss machine, program it and run all the parts, according to his nominator, MaryBeth Campbell, human resources manager at the company. “His skills continued to develop in all aspects of the production floor,” she explains. “He became the ‘go-to’ employee for everything related to machining and production.”

“I just kept working my way through, trying to learn as much as I could take in and participate in as much training as possible,” Ziegler says. “I have always enjoyed troubleshooting machine and bar feeder issues as they arise. I’m always up for a challenge.”

Recognizing that finding skilled workers in manufacturing is a huge obstacle, Ziegler makes training a priority at Swissturn/USA. He pushes training initiatives to ensure his colleagues continue to improve their skill sets, and he maintains relationships with training vendors. He has developed a weekly training program for less-skilled machinists, and he incorporates time for trainees to talk about whatever is on their minds. 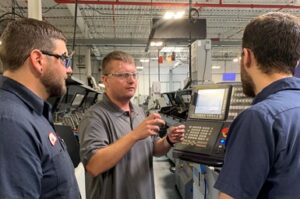 “I try to put them in a comfortable position where they aren’t afraid to ask questions,” Ziegler says. “Also, offering training in-house enables the opportunity to demonstrate different situations in real-time.”

Ziegler says he hopes to work his way up the ladder at Swissturn/USA while adding additional talent to the team and developing current employees’ skills.

Read more about Ziegler and his business strategies, and about the other 2021 Emerging Leaders in this article.

LEAP Into YOUR Future